Ramaiah College of Law, (RCL) being a committed institution in imparting legal education intends to spread awareness on the socially relevant issue of prevention of sexual harassment and the values attached to it, which needs to be equally inculcated by the staff, both administrative and non- teaching. RCL follows a zero-tolerance policy towards the issue of sexual harassment. In tune with this idea, ICC and The Internal Quality Assurance Cell (IQAC) in collaboration with the Internal Complaints Committee (IC) at RCL had organized the orientation programme in Kannada language on the topic prevention of sexual harassment, ideally for the administrative staff, non- teaching staff including house-keeping employees and the watch and ward service providers of Gokula Educational Foundation, encompassing all the departments therein.

A venture of this kind was in compliance with Sec 3 (c) of the University Grants Commission (Prevention, prohibition, and redressal of sexual harassment of women employees and students in higher educations) Regulations, 2015, influenced by the The Sexual Harassment of Women at Workplace (Prevention, Prohibition and Redressal) Act, 2013 (POSH Act 2013).

The main objectives of programme was:

The Resource Person was Dr. G. Manjunath, Additional Labour Commissioner, (Industrial Relations/Child Labour)-Government of Karnataka who himself is an acclaimed master trainer having addressed many prestigious national platforms in this topic and has an extensive research and training experience into the nuances of the Labour and employment issues. He is a Ph.D. holder from NLSIU, Bengaluru and has secured Executive Certification in Sexual Harassment and Workplace Diversity from NUJS, Kolkata.

The basic objective behind this initiative was to create awareness on the issue and sensitise the stakeholders. The programme was conceived in the form of lecture with two hours duration in Kannada language and then followed by a question and answer session. This venture facilitated a platform for discussion amongst the non- teaching staff of GEF to come together as a family unit, opening up issues that are clothed in silence, that too in their own vernacular freely without inhibitions, in turn enabling an idea of inclusive environment.

The programme materialized finally as a great mission for GEF in general and RCL in specific in fostering an informed citizenry on the issue of gender sensitivity and zero tolerance policy towards sexual harassment, ultimately creating a more safer campus which has the potential of conveying a life-long message to the Staff of GEF, assuring quality life, both professional and in their personal lives.

IQAC & ICC, RCL under the guidance of GEF had set a best model practice in this field for having promoted such ventures which adds on value to its commitment and visibility of RCL as a stakeholder in combating such social issues. 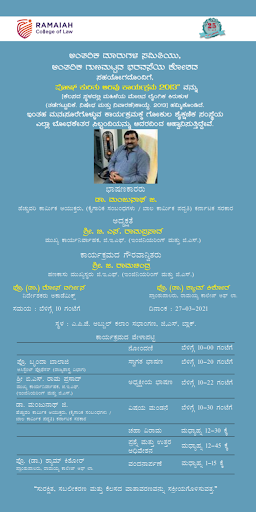 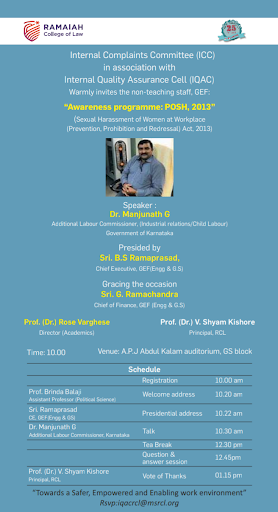