The NCC unit of Ramaiah College of Law, in association with 8 Karnataka Battalion, ‘B’ Group, Bengaluru, organized a national level Inter-College NCC Debate Competition on 4 th and 5 th September 2021. This debate was exclusively for senior wing NCC cadets. The finals of the competition coincided with Teachers Day, which marks the birth anniversary of Dr. Sarvepalli Radhakrishnan. The judges for the tournament were Col Amitabh Kumar and Mrs. Shilpi Kumar. 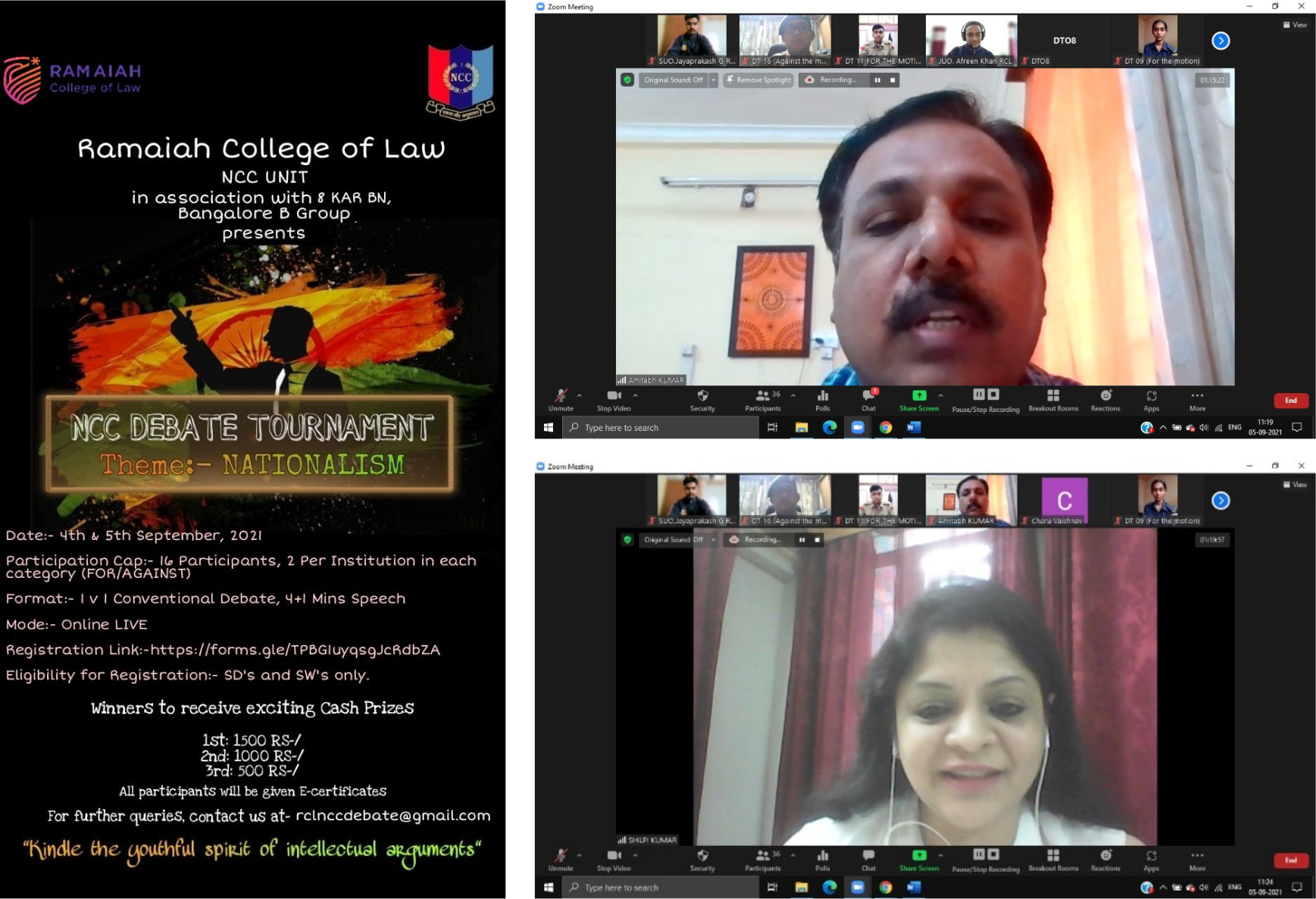 The theme of the tournament was ‘Nationalism’. The motion for the preliminary round was ‘Non-Violence was the sole factor for Indian Independence’, and each participant was given 5 minutes (4 minutes of constructive speech and 1 minute for rebuttal) to present their strongly believed notions on the topic. The preliminary round witnessed 17 participants from 13 institutions and various NCC units. The participants put up their notions very well and impressed the judges with their arguments.

A total of 6 participants, i.e. the top three participants from each category (for and against the motion), qualified for the Grand Finale. The motion for the final was ‘Electronics and Technology are a threat to National Security.’

The finalists delivered their best speeches and impressed everyone. Cdt Ashuthosh Biswal of New Horizon College, 2 Kar (T) AIR SQN NCC, Bengaluru ‘B’ Gp, Karnataka & Goa Directorate was declared the winner of the tournament. Cdt Rushil Ram G A of St. Joseph's college, 1 KAR ARMD SQN, Tp 3 was adjudged as the first runner-up. Cdt Namrita A of Kendriya Vidyalaya Meg and Centre, 39 KAR INF BN NCC, Bengaluru ‘B’ Gp, Karnataka and Goa Directorate was adjudged as the second runner-up. The winners of the competition bagged a cash prize worth INR 1500, INR 1000 and INR 500, respectively.

The judges and Prof. (Dr.) Rose Varghese, Director (Academics), Ramaiah College of Law, Bengaluru, addressed the participants and audience on the importance of being responsible citizens and debating skills. They motivated them to explore the opportunities spread across and work towards the development of the nation. The tournament concluded with the singing of the NCC song and National Anthem. On the whole, the tournament was a grand success.